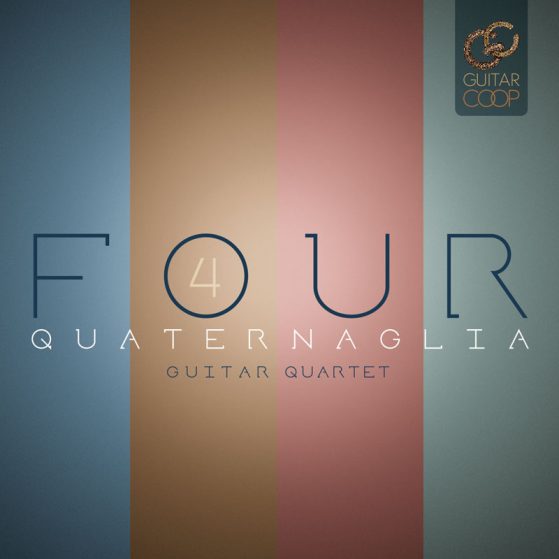 SYMPHONIC DANCES FROM WEST SIDE STORY (1961)

Four composers, four works, four guitars: Four,Quaternaglia’s first album for GuitarCoop, is the result of a vast renewal in the quartet’s repertoire following the group’s 25thanniversary, in 2017. Since Forrobodó (2000), Quaternaglia had never failed to record works by Brazilian composers; in fact, the opposite is true: all four of the group’s most recent albums were dedicated entirely to the music of its homeland. This profound dive into Brazilian culture is reflected in the group’s discography: a total of 25 new recordings of works by Estércio Marquez Cunha, Lina Pires de Campos, Paulo Bellinati, Egberto Gismonti, Sergio Molina, Paulo Tiné, Rodrigo Vitta, Douglas Lora, Radamés Gnatalli, Marco Pereira, Almeida Prado, João Luiz and Chrystian Dozza, as well as arrangements of works by Villa-Lobos, Ronaldo Miranda, Ernesto Nazareth and Tom Jobim.

The absence of Brazil in the present album, thus, is intentional. In the moment of writing, the country itself is experiencing a very delicate reevaluation of its origin and destiny, and to dwell on the sonorities that emerge from all three Americas is also an attempt to understand both the present and the paths that stand before us in the coming years. Born in the United States, Cuba, Chile, and Argentina, Leonard Bernstein, Leo Brouwer, Javier Farías, and Astor Piazzolla – the composers featured in this album – are citizens of the world, figures that transcend regional frontiers.

To premiere and record a new work by Leo Brouwer – one of the most important guitar composers of all time – is an extraordinary honor. Commissioned by Quaternaglia, Así era la dancita aquella! (divertimento) was dedicated “con gran afeto, al Quarteto Quaternaglia” in April of 2018. We transcribe and translate Brouwer’s comments on the piece and its curious title:

For the Leo Brouwer Chamber Music Festival, I adapted a Cuban dance that was a part of my Trio (titled Sones y Danzones) by making parts for second cello and flute. The goal was to allow two excellent soloists to have fun with the Brouwer Trio of Valencia, Spain. In one of the rehearsals, I tried to remember the title of a contradanza by Manuel Saumell (19thcentury) that inspired one of the movements of my Trio: “What was the name of that little dance, again?…” and one of the musicians responded, gracefully: “Little dance?” Haha…!” Thus was born the title of the divertimento written for Quaternaglia, in which I develop similar rhythmic formants. Some rhythmic cells are common to the music of our America, distilled as ever by the legacy of the Africans who were brought to these lands. (Leo Brouwer, 2018)

The work brings together characteristic elements from all of Brouwer’s creative periods, from the homophonic clusters built upon syncopated rhythmic cells to free modal polyphony; from Afro-Cuban melodic fragments to the “quadriphonic” specialization that renders the four guitars into a harp, enormous and fantastic. The work was premiered by Quaternaglia at the Vermelhos Festival in Ilhabela (Brazil) on August 4th, 2018.

Also dedicated to Quaternaglia, Memorial para un regreso (2017) written by Chilean composer Javier Farías is a suite in three movements conceived as an hommage to the poet Pablo Neruda (1904-73). It is the last work in the cycle “Seis Miradas por Latinoamérica”, in which Farías pays homage to each of the six Latin-American recipients of the Nobel Prize in Literature. In the words of the composer:

I have included [in the work] three aspects of Neruda’s life that prove themselves to be central features of his poetry. The sea (first movement), the fight for human rights (second movement), and exile (third movement). (Javier Farías, 2017)

“Brava Mar”, thus, evokes the Chilean seas of Isla Negra and Valparaíso, where the poet lived; “España en el Corazón” is the title of a cycle of poems written by Neruda in 1937, after he had witnessed the horrors of the Spanish Civil War; and “Exilio” echoes the political persecution suffered by the poet in the 1940s. The suite was premiered by Quaternaglia at the auditorium of Sesc Vila Mariana, in São Paulo, on July 29th, 2017, and the work was subsequently recorded in video for GuitarCoop’s series “New Music for Guitar”.

To transcribe the Symphonic Dances of West Side Story by Leonard Bernstein for guitar quartet – a suite for orchestra based on the themes of the 1957 eponymous musical – is a task that demands both mastery of orchestral complexities and knowledge of the idiomatic subtleties of the guitar. Conductor Thiago Tavares, author of a widely-praised transcription of Bachianas Brasileiras n. 9 by Villa-Lobos for Quaternaglia (recorded in the album Xangô) decided to take on the challenge. The work features the most important themes of the musical, including the rivalry between the Jets and the Sharks, the virtuosic mambo, the jazz-fugue inspired by Beethoven’s Große Fugue op. 133 as well as the tragic finale of the love story between Tony and Maria.

Finishing the album, Four for Tango (1988) – originally written for string quartet – is Quaternaglia’s first foray into the work of Astor Piazzolla. Written for the Kronos Quartet, it thrives not only on a montage effect reminiscent of film soundtracks, but on a violent percussivity that is even more accentuated in the transcription signed by Quaternaglia member Fabio Ramazzina.