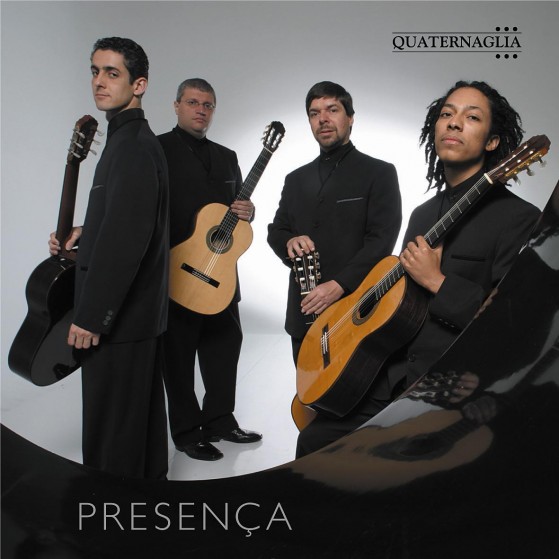 The idea of using themes of the Brazilian composer and popular singer Milton Nascimento (1942) to create a new piece for guitar quartet was suggested by the composer Leo Brouwer. The talk that inspired Sweet Mineira occurred in Montevideo (Uruguay), just after Quaternaglia had recorded the complete work for four guitars written by the Cuban composer (CD-JHO, 1995). Sérgio Molina – a guitarist and Bachelor in Composition of São Paulo University whose teacher was Willy Corrêa de Oliveira – is the author of a versatile production that includes mainly popular songs and chamber music. He worked based on four Milton’s themes, three of them mentioned by Brouwer. The first movement is “Ponta de Areia” (Sand Point), a beautiful pentatonic song that tells the story of an abandoned railroad on the way between Minas Gerais and Bahia (two Brazilian States). This song dialogues and fuses with “San Vicente” (Saint Vincent), the report of a “strange dream” that fills with “glass” and “cut” the Latin American subjectivity. The lyrics of both songs were written by Fernando Brant. The second and third movements – with lyrics by Ronaldo Bastos – are “Cais” (Pier) and “Cravo e Canela” (Clove and Cinnamon): “Cais” shows the necessity of “inventing the limits to be able to be free”, as well as of “creating the dreamer to be able to dream”, and “Cravo e Canela” shows with humor and piquancy the various “spices” of the typical food of Minas Gerais. In the almost classic sonata form chosen for the last movement, Molina mentions, ironically, the beginning of the recapitulation of the first movement of Appassionata op.57 by Beethoven: a low C note – persistently repeated – interferes in the theme, bothers its appearance; but the theme returns and ends by imposing itself, as if nothing had happened. San Vicente, Cais and Cravo e Canela were released by Milton in the historical LP Clube da Esquina (1972) while Ponta de Areia was launched in his Minas album (1975).

Paulo Tiné, a composer and guitarist, also graduated at São Paulo University, studied classical guitar with Edelton Gloeden and attended the Composition and Music Esthetics courses by Ricardo Rizek. His solo guitar pieces are very interesting and have been edited in Europe by Martin Müller Edition. Noite Escura (Dark Night), inspired by a poem written by the mystic San Juan de la Cruz (1542-1591), reveals the composer’s view of the Spanish music, while Presença (Presence) is a choro that began as a homage to the Brazilian composer and performer Egberto Gismonti (reminding the harmony of his piece Sete Anéis), but soon gained its own life, incorporating specific characteristics of Tiné’s work, such as lightness and swing in the thematic material, detailed transitions between the sections, original modulations, and a dynamic form, constantly developing.

Rodrigo Vitta and Douglas Lora are talented musicians graduated in Music Composition at University FIAM / FAAM in São Paulo, both guided by Ricardo Rizek. Vitta, an admirer of the Second Viennese School, takes the risk of always being on the “tonality boundaries”: his work is not nationalist, his view of Brazil is influenced by Alban Berg’s strict harmonic structures as well as by Schoenberg’s pre- dodecaphonic period. Sonata, written for Quaternaglia in 1997, was orchestrated in 2000, becoming the first movement of the Sinfonia Brasileira, a piece awarded at the celebration contest of Brazil’s 500 years. Paisagem Brasileira n.4 (Brazilian Landscape), entitled “Urbana”, was inspired by the work of the Brazilian plastic artist Nele Azevedo, who sculpts little ice men who are placed in chosen spots of big cities: in the middle of the urban chaos, the miniatures simply melt, causing an inexplicable feeling due to their fragility. The first three pieces of the series called “Paisagens Brasileiras”, respectively entitled “Mangue”, “Cerrado”, and “Caatinga” – were written for string orchestra. Unlike Vitta, who also works as a conductor, Lora has a consistent guitar background as a result of his hard work with the guitar teacher Henrique Pinto. His work, mainly directed to guitar, includes solo guitar pieces, duos and trios. The idiomatic character of his writing is immediately revealed in Maracasalsa, his first work for guitar quartet, written for Quaternaglia. The piece shows a virtuoso fusion between the Brazilian rhythm Maracatu and the Latin American Salsa, using the Baroque forms of the toccata and fuga.

Tom Jobim’s songs are so powerful that they frequently dazzle his movie soundtracks. But cinema is present throughout all the poetic course of the composer born in Rio de Janeiro, from Orfeu Negro (1959), at the beginning of his career, to the trilogy Eu te amo (1981), Gabriela (1983) and Fonte da Saudade (1987). Crônica da Casa Assassinada (Chronicle of the Murdered House), based on a homonym novel written by Lúcio Cardoso (1912-1968) published in 1959, was composed by Jobim especially for the movie A Casa Assassinada (The Murdered House, 1971), by Paulo César Saraceni, awarded at the First Cinema Festival of Gramado. The adaptation made by João Luiz highlights the main parts of the soundtrack registered by Tom in his LP Matita Perê (1973), including “Trem para Cordisburgo” (Train to Cordisburgo), a reference to the city were the famous Brazilian writer Guimarães Rosa was born, and “Chora Coração” (Cry Heart), with lyrics by Vinicius de Moraes.

Nowadays it is easy to talk about Radamés Ganattali’s work. Not because it has already been sufficiently studied, but because the musical world is becoming more and more gnattalian. Frequently attacked during his life by the nationalists and the vanguard, as well as by the popular and classical musicians, the composer was born in Porto Alegre and lived most of his life in Rio de Janeiro. His urban and very ironic view of Brazil, his fluency and the emphasis put on pacific fusions of different musical languages announced, in more than 50 years, the postmodern esthetics environment we are experiencing today. Most of the publications about the guitar repertoire of the 20th century mention his two Toccata em Ritmo de Samba, Danza Brasileira, the 10 Estudos (for solo guitar), the four concertos for guitar and orchestra and the concert for two guitars and orchestra, besides his pieces for two guitars, guitar and piano and guitar and flute. The piece performed here by Quaternaglia – its first world recording – was written by Radamés in 1980: a version for guitar quartet based on his String Quartet n. 1 suggested by the Brazilian guitarist and composer Sérgio Assad.